Pintakasi: A Need for the Painted 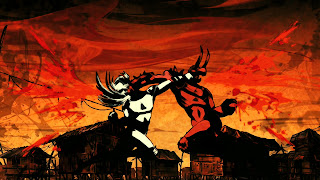 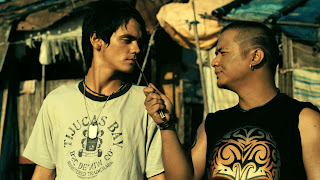 The two meanings of the Tagalog word pintakasi seem paradoxical—a cockfight and a patron saint. But the two meanings are connected, even integrally—pintakasi is something done in honor of a patron saint, usually during his/her feast day and usually in the form of a cockfight—revealing the paradoxical and conflicting nature of the Philippine reality. For the new film that uses the word as its title, it is broken in two, pinta and kasi, giving birth to a new meaning—“painting (or I paint) because…” or “because of painting.”

Pintakasi merges different, usually opposing, elements—reality and romanticism, ugliness and beauty, live action and animation. It is an old and classic story told in modern ways. It is a colorful and interesting melange, incorporating animation, dancing and hip-hop culture into a live-action film that tells the story of a dreamy, young newcomer-painter who challenges the authority and effects change in a poor and troubled community.

Pintakasi is the most talked-about entry in the New Wave section of the forthcoming Metro Manila Film Festival (MMFF), which is a new division of the 37-year-old annual film fete, perhaps the country’s biggest but notorious for its commercialism and questionable awarding. Most likely inspired by the Cinemalaya Independent Film Festival, which has become an important film event, the New Wave section is dedicated to independently produced films, which are usually in digital format, and is divided into full-length and student short film categories. Pintaki’s competitors include Adolfo Alix Jr.’s Haruo, Yeng Grande’s Ritwal, Neal Tan’s HIV and Ogie Diaz and Sid Pascua’s Dyagwar.

The prominence of Pintakasi owes much to the fact that it marks the return to filmmaking of Imee Marcos, former congresswoman and now governor of Ilocos Norte. Aside from coming from the country’s most controversial political family, Marcos was a producer in the Experimental Cinema of the in the 1970s and 1980s, which came out with Ishmael Bernal’s Himala and Peque Gallaga’s Oro, Plata, Mata, two of the country’s greatest films, among other film classics. Her involvement in filmmaking was curtailed when her father, President Ferdinand Marcos, was ousted from power and the whole family went into exile. Upon their return, Imee entered politics but expressed a desire to return to her real passion, the arts, cinema in particular.

Recently, Imee formed the Creative Media and Film Society of the (CreaM), which not only produces film, but also animation and graphic novels. CreaM is also into music, merchandise and game development. The studio has already produced animated short films “Fly Aswang” and “Likas Ligtas: Gubat at Dagat.” Pintakasi is its first full-length film, which is first a graphic novel published online. But the story of the movie is different from the comics, Marcos said.

Pintakasi took three years—two in shooting and re-shooting and one in postproduction—relatively longer than normal Filipino films. Marcos revealed the concept and story go further back.

“I had a story about the new Jose Rizal ages ago,” she related. “It has been a long, long fixation with me. What would Jose Rizal be if it (the film) were a children’s movie or show? The most difficult thing to do is to translate a story as complicated as the Philippine revolution to little children or to young people. Actually, ‘di nila ma-gegets ang mga pulitika at tsaka mga away-away, mga issues ng republicanism, pero ‘pag ginawa mong napaka-human na story na napakasimple katulad ng isang batang dayo na may sariling pangarap ay siguro maiintidihan nila. (Actually, they won’t get the politics, the arguments, the issues of republicanism, but if you make the story very human and simple such as a story about a new kid with a dream, maybe they will understand it.) So that was the story that’s been in my head for a long, long time.”

With the help of writers Judith Albano, JM Diego and Carljoe Javier, Marcos’s vision became a script. The Jose Rizal character became DJ, a young visionary from the province who loves to paint. He comes to Isla Pulo to live with his Aunt Witni when his parents died. Isla Pulo is literally an isle formed by garbage where a shantytown rises and thrives, the residents have forgotten to dream and a small-time gang leader, Tikboy, proclaims himself king of the community. There, DJ comes to teach people how to dream and hope, and meets many characters including Uncle Kernel, a traffic policeman; Apol, an intelligent cripple who moves on a makeshift skateboard, can rap brilliantly and dreams of going to school; Ella, a gang moll and Tikboy’s constant companion; Andoy, a fisherman who runs around with the Tikboy gang to augment his income; and Josie, the most beautiful girl on the island, the love interest of both DJ and Tikboy. DJ gains the respect and affection of the people as well as of Josie, enraging Tikboy who believes in dishonest means to get rich and powerful. When stealing and picking pockets prove to be not enough for Tikboy to gain more money and power, he decides to bring in drugs, but gets arrested because of DJ. Upon his release, Tikboy kills Apol, enraging DJ. The two boys finally get to face off, but their confrontation is curtailed when a fire breaks out, threatening to destroy the island and endangering Josie. As the fire and water cleanse the island through the night, the new day marks a new beginning, led by DJ, Josie and the people of the island. 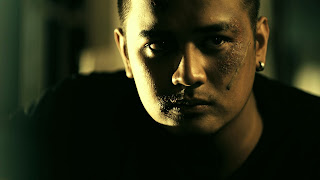 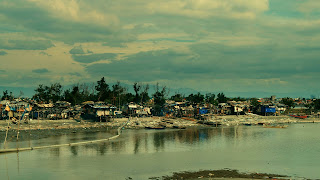 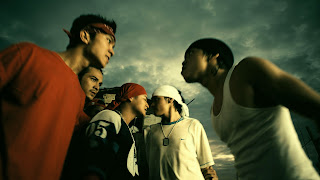 Isla Pulo is a real place in Navotas, Marcos said, and incredulously a community lives there. A recent typhoon has reduced the isle to half the original size. It seems to be a “happy” place, she observed, where people gamble, drink, sing videoke and have sex all day. It is here the setting of story came to be after dismissing a rustic and rice-field-hemmed setting, a surreally Third-World one that foreigners would be interested to watch.

The music of Pintakasi is made not from conventional instruments but from everyday objects to complement the images of trash. “At naghahari sa lahat ang videoke (The videoke is king there),” Marcos laughed. “Siyempre, ‘yung talaga ang all over the squatters’ area. Anuman ang kahirapan, dapat may videoke, alam mo na.”

The film is actually suffused with music and dancing. Former child actor John Wayne Sace was picked as lead because he can dance, as well as two members of the Philippine All-Stars.

“My target audience is the youth. It’s a hip-hop movie,” Marcos declared. “We really made an effort na ang hip-hop na dati-rati puro foreigners, mga Amboy lang…talagang na-localize na siya, and it really became the language of the street and the music of the street. It's the poetry of the street now. I mean rapping, freestyling and beatbox-ing. It's very much the poetry of the Filipino streets right now. It seems like the obvious thing to do. Kung buhay ang mga Katipunero sa panahong ito, sa palagay ko ay rapper na rin sila kasi magaling silang sumulat at nakakapag-communicate sila. Sa utak ko rapper sila. Magagalit siguro ang mga historians pero para sa akin para sila makapag-communicate sa audience nila kung nangyari 'yan ngayon kailangan matutunan nila ang hip-hop para ma-gets sila ng bata. (If the Katipuneros are alive today, I think they would be rappers because they write well and they can communicate. In my mind, they're rappers. The historians might get mad, but for me for them to be able to communicate to their audience they need to learn hip-hop.)”

Another notable thing about Pintakasi is the use of animation, making it perhaps the first Filipino film to combine animation and live action. Aside from the film’s director Lee Meily, a notable cinematographer and wife of multi-awarded filmmaker Mark Meily, there is an animation director Nelson Caliguia, who is a veteran in Philippine animation, coming out from the animation boom of the 1980s, and is current the creative director of Artfarm and a teacher.

Marcos said they wanted to try new ways of executing flashbacks and dream sequences, and thought of animation. She estimated that 60 to 70 percent of the film is in animation.

Marcos is no stranger to animation. Before ECP, she was host of the children’s shows Kulit Bulilit and Kaluskos Musmos, and has worked with cartoonist Nonoy Marcelo on animation projects, including Tadhana, which tells about the history of the and is the first Filipino full-length animation.

“At the end of the day, whether it’s politics or filmmaking, it’s all about communicating with the audience, and the audience is by and large young. So whether it takes animation or any other media…kailangan talaga makuha natin,” Marcos said.

Pintakasi is also a contribution to Philippine animation, which is still at its infancy despite Filipino animators contributing to the world's great animated films.

“Thirty-plus years na tayo nag-aanimation,” Marcos said. “But we never made our own. Now, we have a few. We have Dayo. May RPG… There's a real dearth of original Pinoy materials.”

According to Marcos, one thing that hinders the blossoming of original Filipino content animation is the cost. “Animation can be so costly, and it’s so time-consuming,” she said. For Pintakasi, she estimated the whole film to be around P20 million.

Another reason has to do with the kind of stories.

“I think we are a little bit confused honestly about what is Pinoy and what is universal,” she said. “We have to think of the broader audience…It can't be so Pinoy na hindi na maintindihan ng ibang lahi (that it cannot be understood by other races). It has to be Pinoy perhaps in design or other aspects, but in the end the message must be universal that any human being can relate to. And in the end, that’s where we failed. I actually think that kayang-kaya ng ating mga artists. Walang problema sa animation. Ang problema ay sa storytelling sa animation. Writing for animation is another whole ballgame. We have a lot of great screenwriters pero wala pang training sa pagsusulat sa animation. So we have no expertise in writing the story. And as you know, the most successful animation studio in the world, Pixar, puts a premium on storytelling.”

CreaM is proud to have in its animation and art department Ronnie del Carmen, the Filipino head of story for Pixar’s Finding Nemo, Ratatouille and Up, as one of its three masters in residence.

She added: “But the need for technology is there, if you want to reach the young audience. You go into their media, into their platform. If you’re stuck in the same old stuff, I don’t think they're gonna listen.”

“Hopefully, Pintakasi engages the audience that in time we will be able to move to other platform. So we are doing graphic novels. We moved to the platform of online. Hopefully, [we will be able to create] games, toys, merchandise. Let's see,” Marcos said.

Like its main character, the Pintakasi hopes to, in a way, rock the status quo, introduce new ways of seeing and revolutionizes and sparks changes for the better. 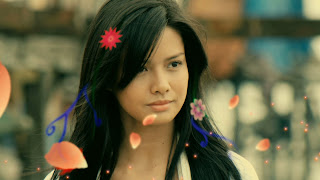 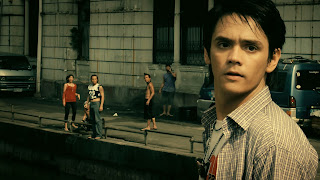 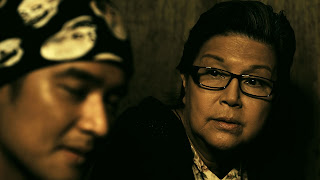 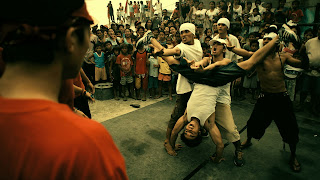 Posted by Gridcrosser at 5:54 AM

Gridcrosser
ROEL HOANG MANIPON How do I begin? There's not much but then there's so much. But it must begin somewhere, so here it goes: I will begin with something "mundane" (but really not mundane; they're all cosmic to me. These are what I do, and thus a big part of what I am: a journalist, poet, fictionist, essayist, cultural researcher, travel writer, publication designer, sometime painter, amateur photographer, translator, strip dancer, masseur, model and a natural cook. Whoa! That sounds a lot. But really, not doing all at the same time, may two or three at the same time, but all them in me. And there are other things that I want to do or be, like being an astronaut, archaeologist, filmmaker, etc. I think one lifetime is not enough for me. Often I don't refer to them as simply jobs but passions. Oh, yeah, I'm forever a student too. Forever a boy.